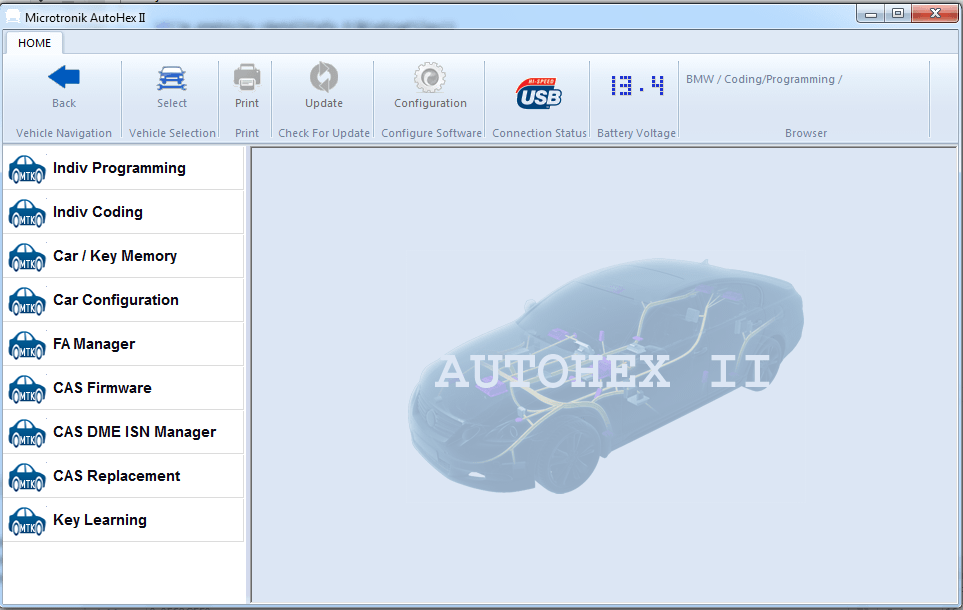 Autohex II for BMW is full of advanced functions that will help you to solve problems you thought they are out of your hands.

You can program any BMW Ecu if it is used or new, some Ecus must have further actions before or after flashing, for example: DME and DDE flashing is not enough to start the car, you must match the ISN between DME and CAS.

You also can program keys in BMW using Autohex II, it supports all versions of CAS (1 to 4+), you will find there is an easy solution to solve the case of: All keys lost.

BMW Ecu Programming is an easy to use with Autohex II, it performs Flashing the Ecu with latest version,code it,Change VIN, and other functions in one step

BMW ISN Editor Software in Autohex II lets you read ISN from DME, match it with CAS. This is essential for DME or CAS replacement, Autohex reads ISN from wide range of DME/DDE

Autohex II Ecu coding for BMW is a straight forward function, you can choose between Auto and Manual coding to encode the Ecu you wish

Autohex II BMW Software can do two methods of Ecu coding, auto coding which will be calculated from FA, and a manual coding for Ecu modification

Autohex II BMW Software can write FA into CAS from other Ecus,backup FA in other Ecus, also you can modify the vehicle order safely

For making keys, reading ISN and changing VIN for CAS which comes with specified part numbers, will not work just through direct reading, CAS Firmware function should be done to make it work

BMW Key programming by Autohex II is done by OBD, No dump is required. including CAS with latest update and all keys lost. it supports all BMW Models as well Mini cooper.